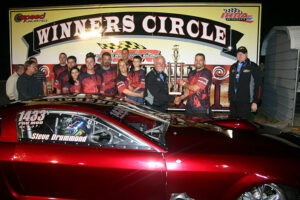 In front of a “Packed House” at MIR (Maryland International Raceway) Steve Drummond “Drummond Race Cars” lit up the Mountain Motor Nationals on the “Northeast Outlaw Pro Mod Sessions” side of the classes in the quickest of them all Supercharger / Turbocharger feature. Drummond has been massaging this “Shop built Mustang” to its potential and looks to have found its sweet spot with another MPH record and of course the WIN!!”. These cars run the full quarter mile in the NEOPMA series which brings even more to the game, big MPH and top end charges and MIR seems to be the place where it’s getting done. Owner Royce Miller knows how to make the records happen. We believe it’s the first “Turbo Car” win in this associations long history. Drummond’s response is included below – Steve Drummond picked a great time to set a new speed record during the 34th Annual Mountain Motor Nationals at Maryland International Raceway on Saturday night. Drummond put up a 6.008 second/254.58 mph quarter mile run in the final round of eliminations for the Blower Pro-Mod class. Drummond Stated “We knew we better turn it up a little bit,” Drummond said. “Saved it for the final, make sure you put a good run in the final. We struggled in the middle of the track and it was just a matter of getting the car set up. We’re still working with it. It was trucking on the back half, from half-track on it was getting busy.”