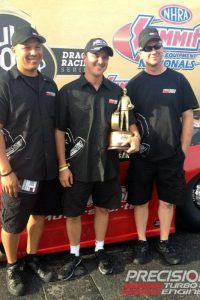 Three of the top four qualified drivers had two things in common: they were running Precision turbochargers and using Pro Torque converters! It was Troy Coughlin who took the number one honors with his 5.949 at 250.64 MPH pass in his ’68 Chevy Camaro, while Don Walsh, Jr. ranked third with a 5.983 at 248.71 MPH run in his ’11 Ford Mustang. Roger Burgess of R2B2 Racing was the number four qualifier after having gone 6.001 at 249.90 MPH in his ’53 Corvette and his teammate Leah Pruett was eighth overall with a run of 6.098 at 248.25 MPH. Steve Matusek was unable to break into the Top 16 but still had a solid run. 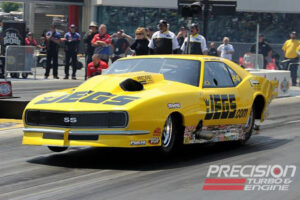 The final round was all Precision-powered and incredibly exciting as this was the first time that Coughlin and Walsh would face each other in eliminations. Coughlin had the early starting line advantage but the car started to get sideways and forced him to shut it down. Walsh launched hard and went straight down the center of the track, running a 5.893 at 251.95 MPH pass – the second quickest and fastest pass of the event, for the win!

Congratulations to Don Walsh, Jr. on his first National event win in only his second final round! With this victory, Walsh moves to fourth in the series points standing. He runs twin NHRA legal Precision Pro Mod 88 turbochargers, a Big Stuff 3 Powertrain Management System and a Pro Torque converter.