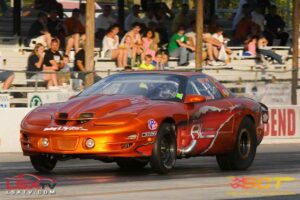 After his shutoff pass in the opening session, Mark Koehler came back for round two and made a big statement, running 7.679 at 183.05 MPH to put an even larger gap between himself and the rest of the field.

Mark Koehler stepped it up in the final session, storming to a great 7.559 at 189.18 MPH to solidify his top qualifying spot going into this afternoons eliminations.

The Drag Radial final ended up just as it should be, with the top two qualifiers and the only two cars to dip into the 7’s all weekend facing off for all the marbles. Mark Koehler was dead late, but made his best run of the weekend to top Steven Fereday, whose 7.932 was no match for Koehler’s 7.511 at 189.60 MPH.