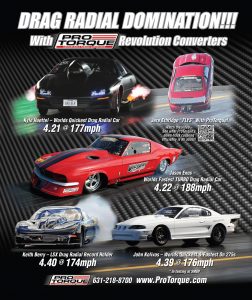 The racers that use the best converters for drag racing have begun the season in a big way!! ProTorque extends their profiles for reaching the largest of goals with the season just opening. From Kyle Huettel’s Quickest Drag Radial Car “Bad 9er” 4.21 @ 177, Jere Ethridge’s nearly impossible save from a world famous video and photo array on the internet as it “Literally Flew” due to the down track coupling efficiency of the Revolution Series Racing Torque Converters.

Jason Enos picked up the title of “World’s Fastest Turbo Drag Radial Car” dropping a massive 188MPH on the boards. Keith Berry stopped the clocks in with the title of LSX Drag Radial Record Holder 4.40 @ 174 and John Kolivas would render the 275’s another part of speed and efficiency success of the ProTorque Racing Torque Converters 4.39 @ 176 “World’s Fastest On 275’s”

Make Sure to Stop In At Drag Illustrated’s Informative Website For More!!