Relative Unknown racer Shane Fisher came virtually out of nowhere this year to WIN the two biggest X 275 races of the year, No Mercy IV and Fall Brawl at Holly Springs. Not only did he win but he was #1 Qualifier and set (and RESET) the X275 record with a 4.53 and 166mph.

Shane, under the direction of Drag radial racing LEGEND John “MF” Kolivas, has dominated this season winning several local races as well as these two last races. Shane is using one of our new Revolution Series Bolt together converters and has had nothing but tremendous success. Look for big things with Shane in the 2014 season and we are happy to have him on TEAM ProTorque

Quote from Shane when he broke the record back in September

“I’d like to give a big thanks to Joe at Pro Torque. I’ve been running ProTorque’s Racing Torque Converters all year and set the x275 turbo record with it back in the spring. I decided to try ProTorque’s Racing Torque Converters new Gen 2 Revolution series bolt together torque converter last week. We bolted it in and picked up 3mph and .03 out back with no other changes!!! Couldn’t be happier with it! We are running numbers thought impossible a few months back!” 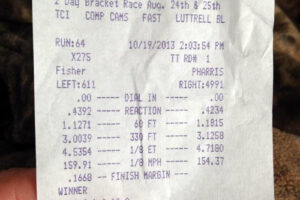